This past weekend I finally got a chance to do some rimfire shooting - I almost forgot the basics😋. As I did not have much time I only took one rifle to the range with the plan to re-tune the barrel tuner after I had made some adjustments during the lockdown period. I took the Red Devil - Anschutz '54 with Krieger barrel.
I have had some trouble with this gun as it shoots on the spot and then suddenly the shot drops 4 rings. The same setup is used for the HV and Sporter guns so I don't think it is a setup problem.
The changes to the Krokodilspruit range did not have much effect on the shooting, but I think it was mainly because I was at the range early and got my shooting done before the usual winds got going.
I setup to the right of the range (bench 23) and mostly shot the green-(ish) condition. The wind was not that strong blowing the light tails between 7 and 8 o'clock. As per usual I start at diagram 25 and work it back. 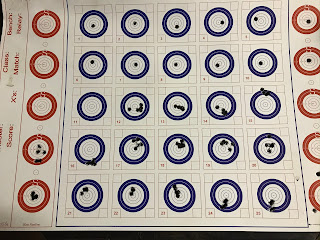 I started off with Lapua Centre-X ammo. I noticed that the slower batches started shooting better, I started with batch number that started with 295, 275 and then 265, for some reason I did not pack the 255 batch.
The way I test - I shoot 5 shot groups at a diagram without compensating for wind conditions. I shoot different batches and manufacturers before adjusting the barrel tuner - don't judge, I have not shot rimfire in a long while and getting my seating correct takes some time. See the table below for info what diagram was shot with which ammo. Note - diagram 5 I did not notice my 1st flag picking up the tail from 6 to 8 o'clock.
I have ordered a new barrel tuner for this gun as I have fiddled with the tuner on the lathe some time ago, will need to follow up in the coming week when I can expect delivery.
I will need to take out this gun for another test session to see if this tune will stick and if not I will replace the tuner and start again. Another change I will consider is to fit it to on of my backup Renier Mostert Rimfire Stocks, and see if that makes a difference.
Posted by Erik at Monday, June 29, 2020 No comments:

Some shooting at last!!!

So,I finally got to shoot a bit the past weekend. What an experience! Firstly I had to figure out how to assemble the flags and set up the bench, this took a while. Then I had to figure out where the front of the rifle was (lol). I can tell you this, after that shooting session I had quite a few aches and pains from all the assembly and break up of flags and all of the bench stuff.

We only got to shoot some air rifle as the range is not accredited for rimfire after the extension. I started with the LV gun and I am still quite impressed. I can't remember the batch number as I was so keen to shoot that I forgot to make notes of any of the batches shot - not bright is all I am going to say about that.

Conditions was not to tricky but you have to watch the flags, I had some shots print on the target and then some seconds later you only notice the flag moved the minimum - and that was the difference. 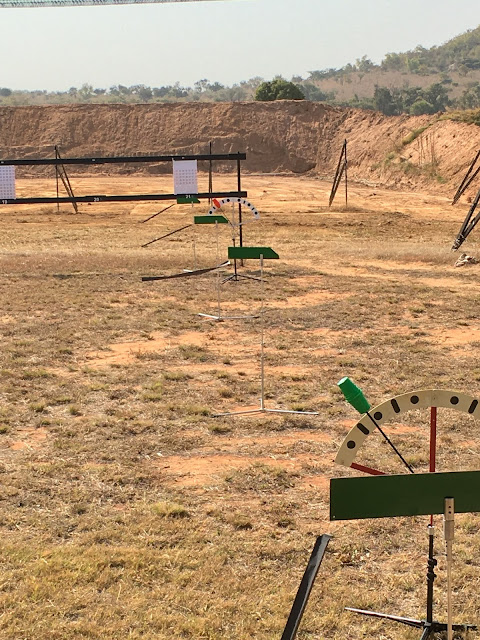 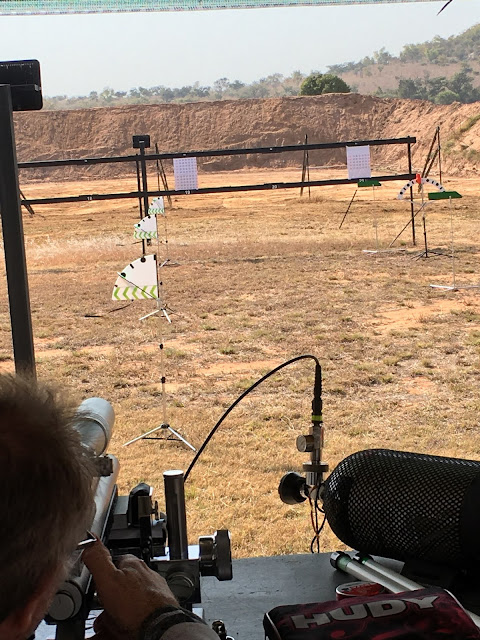 The LV went quite well after such a long lay-off and figure it would have been somewhere between 244 to 246 on both targets. See below. 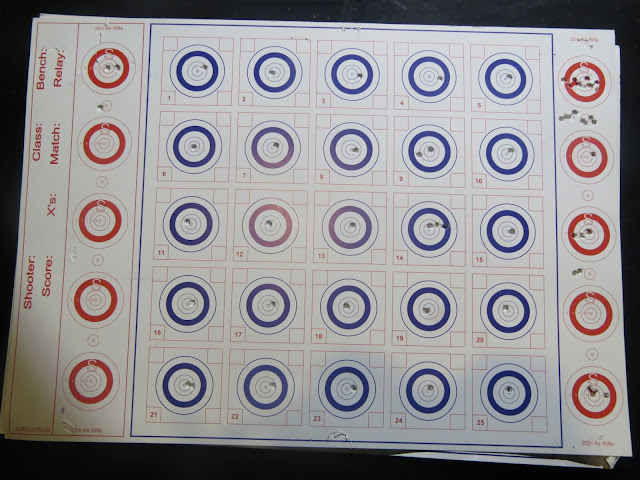 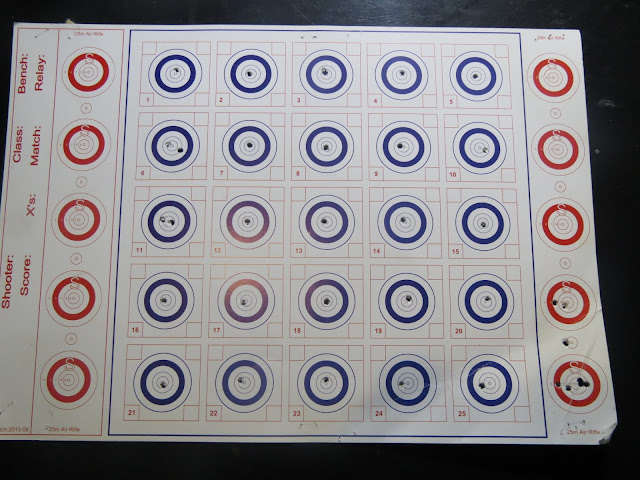 The HV gun worked like a charm once again. It is just amazing how comfortable I feel behind it. The conditions on the range is not the same after the extension, maybe I could have taken more care on the LV targets. The HV I target should be about an 248 or so. Overall not to bad, but as I said the range has changed and one should take note of the flag position wind strength and where the shot prints during practice. 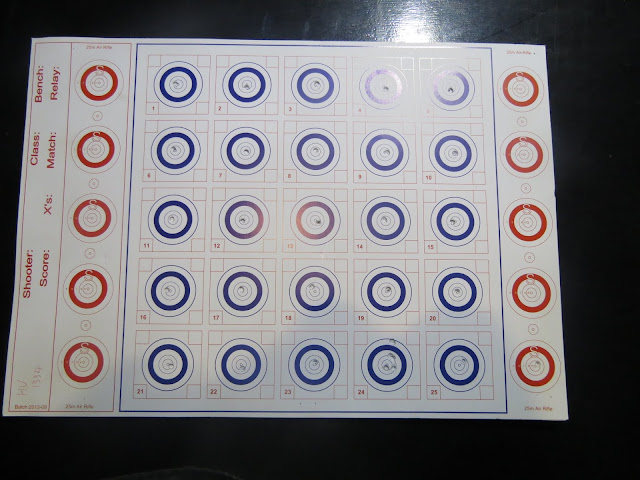 So the day was also about testing my air rifle barrel tuner 'contraption'. The problem here was that I have a scope on the rifle that does not work for benchrest shooting, as the crosshairs cover the diagram - not ideal. The setup used: 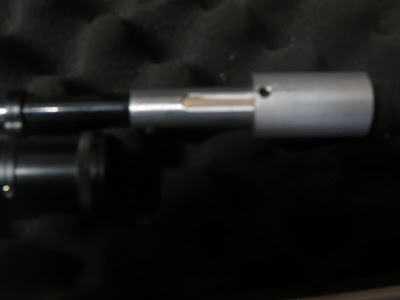 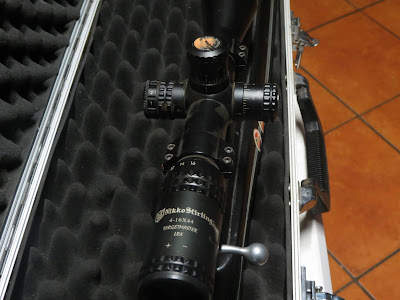 With the difficulty in aiming properly with this scope I decided not to fiddle with any setting on the contraption itself, I just shot some groups to zero the scope to complete the target. Overall I was impressed, but will leave the proper testing for the next time. What I can place on record is that this rifle never shot this consistent, yet I don't have any proof. Check out the 5-shot group below  9 o'clock on the 6 ring at diagram 22. The rest of the target I dropped about 11 points but keep in mind that the scope crosshair covers the diagram which makes aiming off for conditions a bit difficult especially if you are pirating on wind flags. 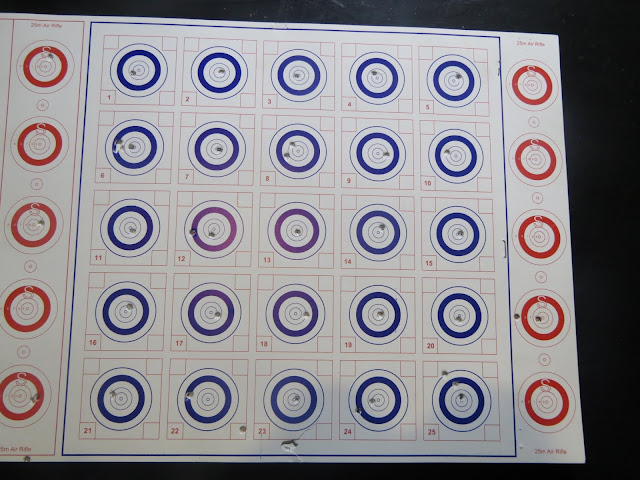 In the end it was good to be out on the range although it took time to figure out the setup and where everything is packed. At some point during setup I was looking for parts while standing with it in my hand -felt kind of stupid but luckily no one noticed(lol).

Cheers until next time! 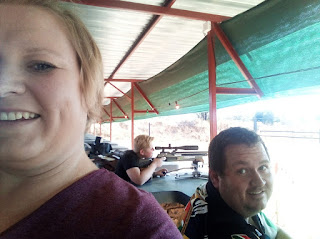